A recent article on Dr. Plotnick’s blog about the feline lungs describes the functions of a cat’s lungs, some common diseases, and some words or phrases that are commonly misused to describe a cat’s breathing. It’s very interesting and Dr. Plotnick does a great job of explaining veterinary topics for pet owners. 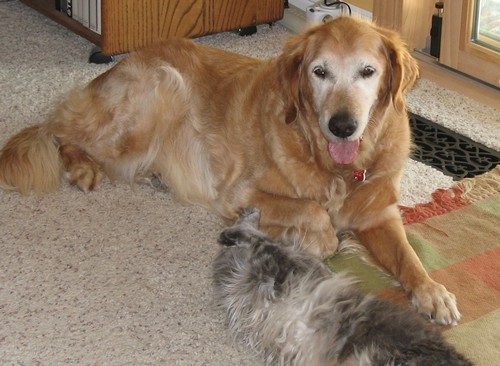 Our Golden Retriever Bentley didn’t have lung disease. But realizing that he wasn’t breathing normally and getting him to the vet saved his life.

It was June 2005 and Bentley was 13 years old. The springtime weather was getting warmer, but it wasn’t so warm that Bentley should be hot or panting. But he was panting for no reason. He’d be lying around the house, or wake up from sleeping and start panting. This didn’t seem right to me so I took him to the vet.

Bentley’s lungs sounded fine, but the vet could feel something in his abdomen and an ultrasound showed a large mass on or near his spleen. Because a ruptured mass or spleen can be life threatening, Bentley was in surgery two days later. His spleen was twice as large as normal and was taking up so much space that it was pressing up towards his lungs and interfering with his breathing. Luckily, the enlarged spleen was not due to cancer, and Bentley recovered very quickly from surgery.

The photo above is about a year after surgery, with Bentley getting some attention from Felix. Bentley lived 4 years after surgery until he was 17 years old!

The only indication I had that something was wrong was that Bentley was panting and he shouldn’t have been. This shows how important it is to know what’s normal for your pet and to get your vet’s advice when you suspect a problem.

Check out some of Dr. Plotnick’s other articles. His previous articles include the bladder, spleen, heart, esophagus, claws, and more. He’s a feline specialist but you can learn a bit about dogs too, and how dogs and cats are different.

20 thoughts on “Learn about your pet’s body systems”

We enjoy getting comments. Cancel reply

This site uses Akismet to reduce spam. Learn how your comment data is processed.