Sprinkles has escaped from her play areas several times. Each time, Mom tries to find a better way to contain our little adventure hamster. Mom put a cover on Sprinkle’s play area, but Sprinkles has learned to nudge the cover over so she can escape! The battle of the wits continues. Mom will modify the play area to try to prevent escape, then Sprinkes will attempt another jailbreak. Who do you think will win?

After the unexpected loss of her brother Thunder, we’re thankful that Sprinkles hamster appears to be healthy.

Sprinkles has a silly quirk – she enjoys playing on the outside of her exercise wheel. She’s actually trying to climb it so she can attempt to leap out of her play area. But we’re on to her trickery and we make sure she can’t escape. She’s already had 3 unauthorized adventures around the house!

I didn’t think I’d be writing a memorial post so soon after Cloud Hamster’s passing, but here were are again. Little Thunder Hamster got very sick a few days ago and he passed away last night. He was only 8 months old, so we were shocked by his sudden illness.

Thunder wanted out of his cage some evenings, but he was unusual in that nearly every morning he would be up waiting for us to let him out. He would scurry around in his play area for 3 to 4 hours. I’d make him take “potty breaks” back in his cage for a chance to go potty or get a drink, but he wanted out, out, out! The past few months while we’ve been working from home he had hours and hours of play time. Even though he was not a big fan of the exercise ball, he took a few adventures in his ball on the back patio.

These are the best photo I have of him. He scurried around so much that most photos are a blur of fur.

Thunder is buried on the east side of the yard. We thought that fitting for a hamster who loved the mornings.

Mornings will be boring without our little Thunder.

I’ve been procrastinating writing this post, but it’s time.

Our beautiful, friendly hamster Cloud became very ill and had to be euthanized.

We noticed he was less active for a couple weeks, but he didn’t show any signs of being sick. Wednesday evening (April 8) Mom noticed that he hadn’t eaten the treats she scattered around his cage the night before. He was also very lethargic. Mom syringe fed him some sugar water and hoped that would perk him up. On Thursday morning we took him to the vet, but he was already in very serious condition and the vet thought his chance of recovering was very poor.

Since we didn’t want our sweet hammy to suffer, our only choice was to have him put to sleep. With the coronavirus pandemic safety measures in place, we weren’t allowed in the clinic for the exam. A tech came to the car to get Cloud and we talked with the vet by phone. After the vet gave the injection, a tech brought Cloud out to us so I could hold him as he journeyed to Spirit World. I’m sure he felt our warmth and love as he slipped away. The vet came out a few minutes later to be sure the process was complete and express her sympathies.

We had Cloud not quite 1 year. We assumed he was a youngster when we rescued him, but maybe he was older and that’s why he became ill sooner than we ever expected.

Here are a few of my favorite photos of him.

He enjoyed a warm cuddle in his Dad’s hands. Dad thought the tuft of stand-up of fur on the top of Cloud’s head was cute. 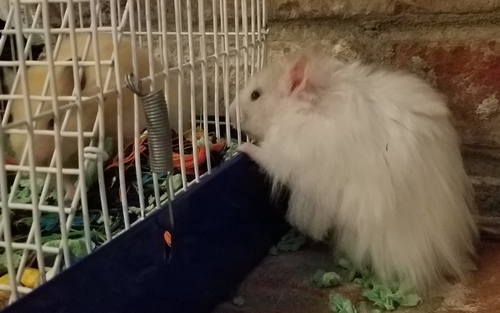 We buried Cloud in a flower bed, where his body will be surrounded by colorful flowers as his spirit soars.

We’ve been keeping a close eye on Thunder and Sprinkles. They were also a bit less active, but appear to be doing fine.